‘On Wednesday the whole school draped on their togas, ink printed with their own designs, put on their hand-crafted cardboard jewellery and armour made in Italian with Anne-Maree and paraded out in to the BOXWARS auditorium to act as the crowd for the BOXWARS chariot race.  Caesar himself was there to start the race dressed in a splendid armour of cardboard. We clapped and we cheered for our favourite chariot team. The race was on between the four chariots, designed and made out of cardboard. The teams were fierce competitors and there was a fair bit of cheating spotted on the sidelines. The red team were victorious taking out the cardboard trophy for overall winner. Other prizes were given for creativity, design and flair. It was a fabulous day amongst the Romans.’ 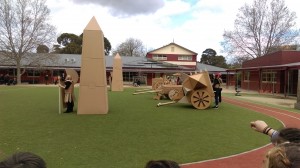 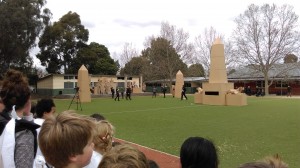 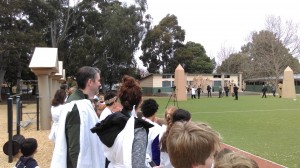