Mental strategies for multiplication and division

“While the every-day experience of most 5 year-olds supports intuitive ideas of getting/having more (addition), losing/having something less (subtraction), fair shares/sharing (division), and doubling, it generally does not support a notion of counting equal groups or repeated addition. In the first years of schooling, children are introduced to a range of contexts in which addition and subtraction occur, develop strategies for addition and subtraction facts to 20, and become acquainted with place-value. As a consequence, by the end of Year 3 most students are able to use a variety of means to solve a range of addition and subtraction problems. In contrast to the relative short time needed to develop additive thinking, the introduction and exploration of ideas to support multiplication may take many years and according to some researchers, may not be fully understood by students until they are well into their teen years” (Di Siemon)

Mental strategies for the multiplication facts from 0x0 to 9×9 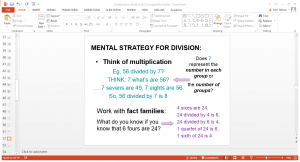